A Dialogue with Nancy Sharp, author of “Both Sides Now: A True Story of Love, Loss, and Bold Living.”

DK: What made you decide to write a memoir and share your story of loss and renewal with others?  Were you inspired to write about your experiences right away or did something happen that led you to begin the writing process?

Nancy Sharp, author of “Both Sides Now: A True Story of Love, Loss, and Bold Living”. Learn more at NancySharp.net

NS: Not right away, no, because my husband’s illness unfolded over several years, and then the twins were born, and life became unusually complicated caring for them and a sick husband at the same time. It wasn’t until after Brett died that I began to feel a responsibility to use my experience in a way that would reach other caregivers and families impacted by illness and loss. I saw how hungry people were to know what helped sustain me and my children. And that what I had to say made a difference. By the time I had moved to Colorado in 2006, I was beginning to feel more empowered and this, too, attracted people to my story of bold living.

DK: Did you do any research for the book?  If so, please explain how it informed the narrative.

NS: Yes. I had many old journals to rely upon as well as interviews with friends, family and my husband’s physicians. All these resources were invaluable, and none more so than the voluminous medical records that charted treatments, symptoms and dates with factual accuracy. Why was this so critical? Because trauma affects memory, and the frailty of my memory was indeed compromised. One example, in particular, is that I remembered Brett being cancer-free far longer than the records state before we decided to try and have children. Looking back on it, I see how I needed to reassure myself that he was in fact okay.

DK:  Can you describe your writing process?  Did you use an outline?

NS: I began by making a timeline. This allowed me to fill in scenes, which I then wrote into chapters, some of which are only a sentence long.

DK:  How did you decide on the unique structure of the book?

NS: Both Sides Now is a good example of how story should inform structure. I first began to write the memoir using traditional long chapters. I wrote six chapters that both bored me and made me question my intentions for writing the story in the first place. There was too much on the page – too many words, too much processing. I came to see that in order for readers to use my experiences as a way to reflect deeper upon their own, they would require white space on the pages. That was a profound insight, and entirely changed the structure of the book. Suddenly, everything became clearer to me. There is nothing linear about mourning, so why write the book in a linear fashion? Grief is fragmented, and so is life. Thus the bite-size, fragmented chapters of Both Sides Now, while still telling the story.

DK:  You have an MFA degree in Creative Nonfiction. How did your degree impact your story?

NS: Lucky for me, I’d tinkered with my manuscript for a good year prior to starting Goucher’s MFA program in 2010. I’d already had the big revelation about structure so by the time I enrolled I was able to set straight to work writing in the way I felt would best tell the story. In my case, the structure and one-on-one mentorship of a low-residency MFA program gave me the disciplined focus I needed to complete the book in entirety within the two years.

DK: What did you learn about the craft of writing while working on your memoir that you would like to share with our readers?

NS: It bears repeating: story should inform structure. Too often first-time writers get hung up on how to format a book before they’ve figured out the essence of what it is they are trying to do. In photography terms this would be like feeling you have to render all eleven zones of Ansel Adams’ Zone System in order to make the perfect print. There can be many shades of gray, but I’m of the belief you don’t have to chart every one in linear sequence. Patience and perspective are also hugely important as writers needs time to distill their thoughts. Finally, grounding details and the ability to write in a sensory way help to give a book more universal appeal.

Self Publishing a Memoir 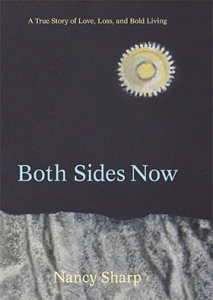 “Both Sides Now: A True Story of Love, Loss, and Bold Living.”

DK: Can you describe the path you took to get your book published? How did you choose your method of publishing?

NS: My literary agent was very passionate about Both Sides Now, and while the responses she received from a variety of mid to large publishing houses were almost overwhelmingly good, that did not translate into acquisitions. We received one beautiful rejection after the next (maybe 26 in total, not terrible in spite of how it felt). Which is to say that just because an editor is mesmerized by the narrative and writing, there are many other considerations. Memoir is a dicey category, especially for first-time book authors. It just so happened that at the same time my agent was pitching Both Sides Now, there had been similar sales at other houses by authors with name recognition. You can’t compete nor control these factors. This was also before the school shootings at Newtown, CT, an incident that seemed to shake the national consciousness about death and mourning. Somehow the subject feels less objectionable now. Had we continued to vet smaller publishing houses, I’m confident that Both Sides Now would have found a traditional home. But then several author and speaker friends began to whisper loudly in my ear that I ought to own the rights to my story. The more I listened and learned, the more I realized that they were right. That is how I came to be published with the independent house Books & Books Press.

DK: Because your book is so personal, did you make certain considerations when sharing your material with potential agents and publishers?

NS: I did. I was very conscientious about information I revealed regarding my children, knowing that someday they’ll read the book. I thought hard about the scenes and language I used involving them to be sure I wouldn’t expose them in ways I might later regret.

DK: Do you have advice for memoir writers who want to publish their work?
A: Don’t write to be published. Find another reason, any reason.

DK: What sorts of blocks or challenges did you face in both the writing process?  How did you overcome them?  What advice do you have for writers who may face similar obstacles?

NS: Writing an intimate story that is at times painful requires the ability to maintain perspective and emotional distance. Cheryl Strayed published WILD a decade after she hiked the Pacific Crest Trail. In my case, nine years passed since Brett’s death at the time Both Sides Now was printed. Naturally I began writing the book a few years prior but I’m not sure that I would have been ready to write it much sooner. I was still trying to acclimate to life as a young widow and single parent. And then I made the decision to begin again in Denver, Colorado. Months later I met a TV news anchor who was also widowed with two children; we married and blended our families. All of this is to say that life happens, and the events in my life became part of Both Sides Now. Had I decided to write the book earlier, who knows how the story would end?

DK:  Apart from writing, you work as a keynote speaker. Tell us more about that and how this form of oral communication has helped with both the process and promotion for Both Sides Now.

NS: Being asked to tell my story is what gave me the confidence to know that it was a story worth writing about. People in a variety of healthcare and faith settings were among the first to want to learn more and apply insights and lessons learned to their own disciplines. I don’t see it as an accident that both my writing and speaking careers are accelerating at the same time. Today I frequently talk to large groups about loss, wellness, courage and bold living. The stories and scenes are drawn directly from Both Sides Now and all that I learned from the writing process. Using my written and speaking voice to lift others is my life’s purpose.

DK: You currently author two blogs, Vivid Living and Tasting Life with Nancy Sharp.  You also blog for the Huffington Post.  How has blogging informed your work as a book author?

NS: Blogging helps authors learn different ways to convey their stories and message. Vivid Living came first and as the blog slogan says, this blog is all about trying to live “life in full bloom™…thorns and all.” This is bold living at its best; going forward no matter what obstacles come your way, and it’s one of the clear takeaways of Both Sides Now. With Tasting Life, a food blog about the many ways that we feast on life, the sweet and sour all at once, I came to see how vital food and cooking were to my identity. Hence, you’ll see quite a few scenes in the book revolving around food, portraying the need to nourish, the need to sustain, the terror at watching a loved one lose the ability to eat, and later, the recipes that preserve memories.

How to Buy the Book and What’s Next

DK:  How can readers reach you and buy the book?

NS: Both Sides Now: A True Story of Love, Loss, and Bold Living is available at bookstores everywhere, online or through my website at NancySharp.net. I can be reached at [email protected].

DK:  What’s next?  What are you writing now?

NS: I have three projects keeping me busy, two of which are non-fiction, the other a novel. One of the nonfiction ideas began as a picture book about helping young children understand death. I’m no longer sure that a picture book is the best way to tell this story; it may be better served by reaching a slightly older youth audience. Because so many people and groups are drawn to my message of bold living and reinvention, I’ll probably work on this book first. Stay tuned.